Mgt here is sold on Microsoft. Net so it is a challenge to get them to even upgrade our PB version as we've been stuck on PB7 for yrs. Need ability to generate nonvisual service objects in. Net ASAP. Don't want to wait for full visual. Love using Powerbuilder, just sad that management does not see how valuable it is. We will still be using it for at least the next 2 years, but after that, who knows?

Powerbuilder foundation classes has to be documented and to be made more structured like. PB also should give us the opportunity to write classes and thereby GUI's will be generated. In a one page all GUI script classes should be displayed. Web development should be user friendly and should support IIS web deployement with datawindow compatibility. I've been laid off from PB work because my ex-company decided to outsourced software development to India.

Web DataWindow is an excellent technology that needs to further include all native client DW functionality by supporting other events and user defined buttons. Powerbuilder has been a stable development evironment for years. I would like to use. NET but still use PowerScript to access all the.

NET api call. Sybase takes too long to deliver for the developers. You can spot a PowerBuilder Sybase has run the product into the ground. Well, I love working with powerbuilder in the past 4 years, but when I know about. Net, I said to myself, Microsoft will any other competitor in the same intrest, like PB, Flash with xaml Unless they struggle to keep their market boundry, for my opinion Datawindow. Thanks and best regards.

PB is the best Windows development tool still. But it is not a preferred web development platform. We missed the web curve! We are about missing the mobile curve with PKB too Still waiting for the. NET integration. And many customers are migrating to Java. It's high time that Sybase fought back in PB In my opinion, PowerBuilder is still a strong development tool.

However, Sybase hurt the product some years ago when it attempted to concentrate on consulting instead of improving the product. I would love to see a stronger push by the company to market it's multi-platform development abilities.

In the presence of source control systems, they have no positive function at all. PB definetely, great RAD tool to work with, stands tall from a developer prespective atleast for me , but couldn't impress my clients. I love PB and support it for more than 10 years. I also love PFC. That's why I want you to change your mind about PFC open source support. It is not only a script library but also proves the power of PowerBuilder and Datawindow. PowerBuilder needs the following: Rich text edit style for datawindows.

Fade and blend effects for all objects datawindow controls. Ability to create polygons in datawindows. If it had the above, I would give it a 10 instead of an 8! Hope one day Multilingual ascpect will be within powerbuilder actualy we use the Translation tool kit, but the tool is not good enough for a big application.

While I still have a high regard for core client-server PB functionality, it has never convinced with its wider offerings.


While I am sad to give it up personally, it is losing ground in my company and I think it's best hope is in. On moving from PB 6. When an object goes from invisible to visible, it is now disabled, for example. Also some things are hard to find. During our 5 years of development in Powerbuilder, we have have repeatly come up againest Flaws, issues or restrictions placed on us by Powerbuilder. The IDE has proven to be unstable, and we've suffered countless times from our Application behaving differently when compiled to when its tested from within the IDE.

The world has become very confusing with all sorts of web technologies. Gotta be web enabled! Whats wrong with standard client server? 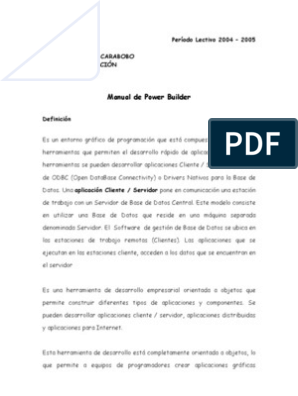 We have built large bespoke long standing client-server applications that are ever growing. The paranoia about moving to web" can have a very negative impact on an otherwise very viable standard client server application. Moving to EAServer just seems like more complexity of the environment. Needs money, resources, marketing. Needs money, resources, marketing First off, please do not drop support of PowerBuilder, I still believe that it is the best client-server application development environment around. NET does not compare. On that note, I think improvements in it's integration with other tools and also low-level enhancements like user defined enumerations, and possibly also bit level operations would be very beneficial.

We love the datawindow here, there is nothing better. NET datagrid simply does not compare, and any improvements to the datawindow.

Need better graphing, especially ability to choose color order of linesseries. Ability to write to pdf without ghostscript third party tool. Even better, ability to export reports to MS Word. PowerBuilder is rapidly losing it's appeal. NET is the better tool and priced correctly. Sybase continues to do a poor job in pricing and marketing it's product. In addition, PowerBuilder developers are hard to find, which makes the product less appealing.

From the point of marketing, Sybase didn't bother to market a good product, instead focusing on mobile wireless computing. Powerbuilder is dying a slow death due to Sybase's failure to market the product. Sybase apparently sees integration with Microsoft as a way to enhance the product, but beta testers do not concur. PowerBuilder While PB still is the best and most enjoyable development tool to use, it definitely needs a major overhaul to get it back to the top or even into contention again. With Windows Vista just around the corner, PowerBuilder should be planning right now, to prevent a repeat with what happend with Windows XP.

There should be a better plan towards the future. The talk abould discontinuation gets very annoying. A decision to stop or to continue makes is a lot easier to plan for the future. PowerBuilder has great potential but suffers from strange marketing decisions like the ones about distributed componants, added, removed, replaced by another solutions with costs It would also help to have direct connection to EA Server.

Problems with components in EAServer when using database access should be solved. The alternative is bind the object to one CPU ans ocassionally fails. We are missing a 'indenter' for script: after copiing script fro another script, we need to reindenter the whole script. For a while, I was worried PB was fading away. Now, I use it at work, I contract using it, and I'm writing my own software with it.

Anything Sybase can do to allow me to program in PB but distribute it in various ways is appreciated.